I was noodling this idea early last year, and shared it with a local Austin company that deals in ratings for retailers. They nodded and said, yeah, yeah, we are already going to do that, it is nothing new. But I guess I am not shopping at the right places, because I have yet to experience this type of personalization while shopping for clothes online.

The problem in shopping for clothes online- I don’t want to see all the merchandise in a stores, just the clothes/lingerie/swimwear that will look great on me. If the store knew my measurements (they can collect it at account creation time or when I leave a review), and the measurements of other reviewers, they could just show me clothes that were highly rated by other women with my shape. This concept isn’t new, Netflix built an empire on it, but why hasn’t it extended to other e-tailers?

For example, when I land on AnnTaylor.com, it should show me 5 shirts and 5 pants that are perfect for me with a big “Add All to Cart” button. Throw in some matching shoes and accessories and I just dropped $1k in 5 minutes. Done! Happy retailer, happy shopper.

Oh, and make sure to follow up with an email when new items are rated highly by my same shaped peeps- odds are good you’ll hook me for another purchase or two.

Who’s going to do this first? Gap, Nordstrom’s Victoria’s Secret, David’s Bridal, anyone game to beta test this and watch the revenue spike? I’d be happy to help with the UX design.

Last week I had the opportunity to speak at the Mobile UX Summit along with Josh Clark, Brad Frost and some other inspirational guys. My talk was a case study of Silvercar, a start-up we led the UX design for last year. The talk explores how and why we took a Mobile First approach to the design part of the project. It also illustrates the process and deliverables for each stage in a cross-channel UX design project.

I’m going to re-record and post the audio as well in the next week.

Learn How To UX: UX Apprentice 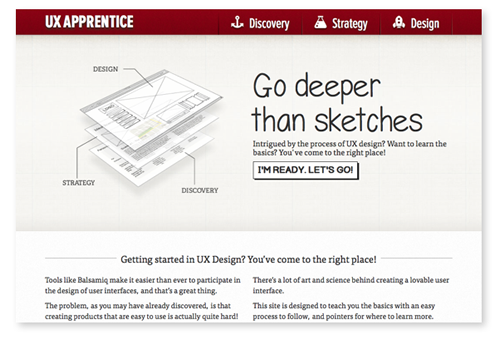 UX Apprentice is a joint project with the great folks at Balsamiq. Last year they asked me to create a resource for their millions of users who are not UX practitioners. As you’ve probably noticed, everybody uses Balsamiq now days to mockup products: developers, product owners, entrepreneurs, marketing teams, etc.

UX Apprentice is for you. We knew you didn’t have time to read the hundreds of books out there, and might not know which ones to start with even if you did have the time. So we wrote a little story, or study, of UX in practice, and added some theory and additional resources along the way.

If you have any questions or feedback you’d like to share, please let me know so we can improve this site over time.

The Dangers of the Wrong Mobile Strategy

Presented at the IT Leaders Forum- Executive Networks. 20 minute intro used to start a discussion on mobile strategy. Number #1 biggest mistake, not knowing what options are out there and how to pick the correct ones for your organization. Number # 2 biggest mistake- stopping there. This talk includes some great examples from retail, subscription based services, and service design, and an example of a company in the danger zone.

HTML5 Can’t Be Your Mobile Strategy

Earlier this month, I presented an updated talk on Mobile Strategy for Servoy. This one hour talk looks at the 3 options for a mobile strategy: Responsive Web, Mobile Optimized, and/or Native. I also explained why HTML5 is not a strategy; it is merely a technology you can use to implement any and all of these options. And we briefly discussed the three faces of Mobile First and how this methodology helps companies break out of old habits to create better customer experiences. 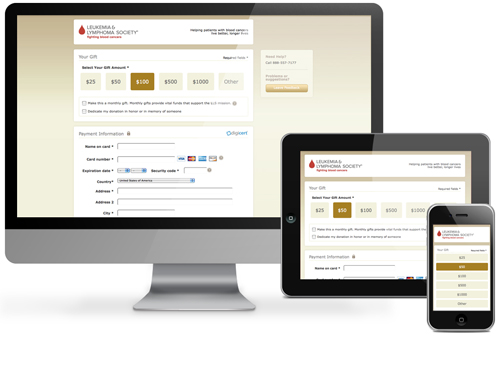 It’s not every day a client entrusts us to redesign a $100 million dollar form. But the Leukemia & Lymphoma Society knew they had to do something to fix their donation forms. They were fielding phone calls from people angry because they couldn’t give LLS money.

One of the prospective donors was particularly upset, and I empathized with him. I lost my father 2 years ago this month the Leukemia. There wasn’t much I could do to help my father fight blood cancer, but one thing I can do is fix a broken user interface.

To guide this endeavor, I wrote a manifesto to address people’s frustration with the existing form:

Looking at page 3, On Your Terms, what were our options? Mobile Optimized Sites or Responsive. Learn more about these two strategies.

It was a hard decision. Ideally we should have probably created a mobile optimized form that had half as many fields, but the organization wasn’t ready to ruthlessly edit their form donation yet. And our first version was just a “fast-fix”, planned for 30 days from start to launch. No back end code changes, just UI changes. So we went with Responsive, meaning we designed the form to work well on any sized screen, from a desktop browser to a mobile phone.

The forms were developed with:

And chose these devices to test on:

(Thanks to Mudassir for pointing out that my earlier phrasing was incorrect- we didn’t target these devices, just tested on them. )

The final result is available at LLS.org, and it can also be accessed by donating to individuals participating in Team and Training and Light The Night.

We’re still working on these goals: Fast, Respectful, On Par…, and Helpful, but we’re getting there, and this is a big first step.

Here are the slides and material from the 1 day class I gave for Door64 in Austin.

In a nutshell, the first 45 slides look at the mobile strategy options and explains each, the next 150+ slides deep dive into the four options: responsive, mobile optimized sites, native apps and hybrids.

I pulled shamelessly from Luke W, Ethan Marcotte, and Rachel Hinman’s books and articles to create this class, and am in debt to these great designers for sharing their mobile  know-how.

I will soon be presenting this class for Udemy if you missed the Austin talk!